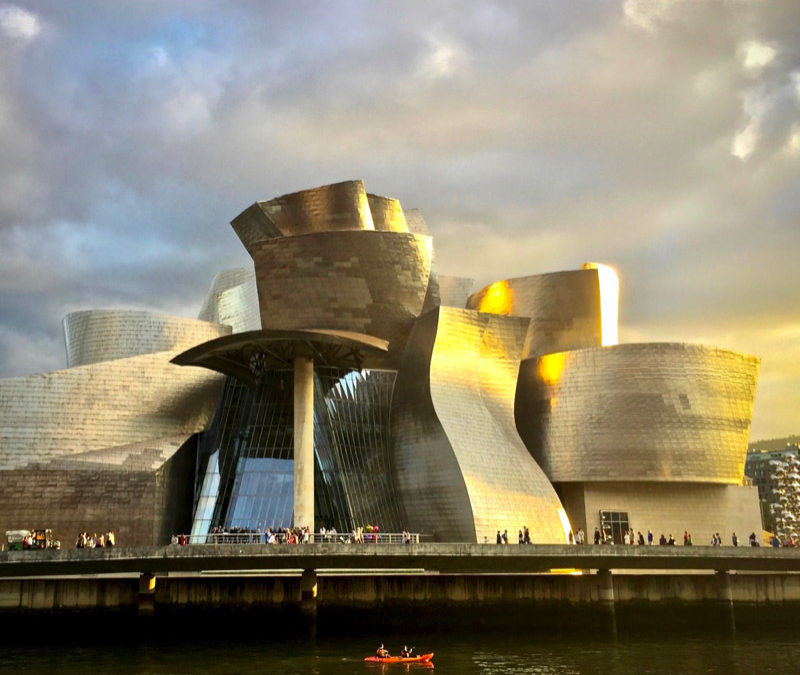 Bilbao has made a great effort to reinvent itself after the crisis of the 80s and the great flood of 83 that affected the heart of Bilbao. Today, thanks to the creation of new buildings and the remodeling of others, Bilbao looks totally cosmopolitan and ahead of its time, you will be surprised if you knew how much it has changed!.

It is the best-known building in Bilbao without a doubt. You can not come to Bilbao and not even walk around this magnificent museum. Emerging from the banks of the Nervión estuary, the iconic undulating structure of the Canadian architect Frank Gehry has achieved, since it opened its doors in 1997, to revive the city in an unimaginable way and has done nothing but surprise its neighbors and visitors.

Its structure is full of recesses and inside you will find the best in contemporary art, such as permanent exhibitions that include works by Richard Serra. I am passionate about its structure, inside it looks like a maze of walls and iron, but on the outside, it is like a giant ship, covered with something that looks like fish scales: 33,000 titanium sheets that are making different reflections depending in the daylight of that moment.

This place in the 14th century began as the square where the fishermen, cattle rancher, and villagers sell their products in the most important port in northern Spain, today it has become one of the largest markets in Europe with 10,000 m2 of surface. The Spanish architect Pedro de Ispizua inaugurated it in 1928. Is done in a rationalist style and it´s all made of reinforced concrete.

Is a reference in terms of shopping for the whole of Biscay and since 1990, it appears in the Guinness Book as the most complete Municipal Market of Supplies, considering the greatest number of merchants and stalls.

This building today it´s known as Azkuna Zentroa or what is the same Azkuna Center in memory to one of the great mayors that the city has had but this leisure center and culture in the past was the alhóndiga of Bilbao.

The Alhondiga was a wine store that facilitated the supply to the merchants by providing a place of storage and optimal conservation of the wine. The one in Bilbao was inaugurated in 1909 by Ricardo Bastida and was restored to what it is today by the French designer Philippe Starck in 2010.

The “fosteritos” its what we call to those circular glass structure that looks like a conch shell, the entrance to some of Bilbao metro stations. There are named is in honor of the subway architect, the British Sir Norman Foster. This acclaimed architect built the Bilbao metro system in 1995, which is mainly made of concrete, steel, and glass.

The new stadium of San Mamés is worth mentioning. It was built in two phases and the first was inaugurated in 2013, finishing the second in 2015. This same year 2015 it was awarded in the World Architecture Festival held in Singapore, as the best new construction sports building in the world.

If you have not seen it yet, I recommend you visit it at night or when there is an Athletic Bilbao match. These are the moments that their illuminate the stadium similar to the Allianz Arena in Munich. Athletic de Bilbao, our football team, together with F.C. Barcelona and Real Madrid, are the only ones who have always played in the first division of “La Liga”, and Athletic the Bilbao being the only one supplied by players from the Basque Country, this being a unique case in the world elite football.

If you need a little more information or need me to accompany you or just want to say Hello, please send me an email oihana@bilbaofoodsafari.com or find me on Facebook or Instagram.